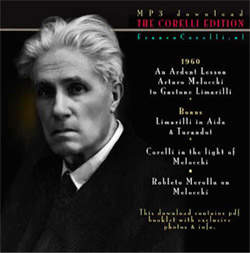 Melocchi teaches Limarilli some vocalizes and the interpretative finesses for 'Celeste Aida' and sections of Turandot. Among the latter is the famous passage 'Ti voglio ardente d'amor', which appears at the end of the riddle scene, after Turandot begs her father not to marry her off. Most tenors shun the optional high C there, but Corelli always sang it in performance (an intriguing rehearsal tape confirms that he reserved his top notes for the audience, whilst saving himself in rehearsal). When Melocchi explains Limarilli how to sing it on stage, Limarilli tells him that he always sings the lower option. Melocchi, rather outspoken on this candid lesson, exclaims that this is 'bruta' (ugly). 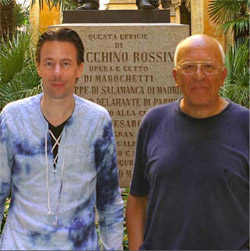 What can you expect of this download? To begin with there is the tracked and annotated voice lesson of Melocchi to Limarilli in acceptable sound quality (rather than the quality given in the YouTube excerpts of this lesson). Even if you don't speak Italian, you will be able to follow the sections of the lesson. In addition, you find the excerpts rehearsed in full renditions by Limarilli, as well as by other Melocchi pupils, most notably Mario Del Monaco, Franco Corelli himself, and Melocchi's last pupil, Robleto Merolla. The latter also features in an interview excerpt with the undersigned. I interviewed Merolla, who died in 2010, in the wake of writing Franco Corelli The Legacy. Filmed excerpts of Merolla explaining Melocchi's lowered larynx technique can be seen on FrancoCorelli.nl, in the Ardente section. Through splicing Franco's Calaf renditions of the sections rehearsed in as a bonus, you can hear exactly on what anvil his interpretation was forged. The download is available here 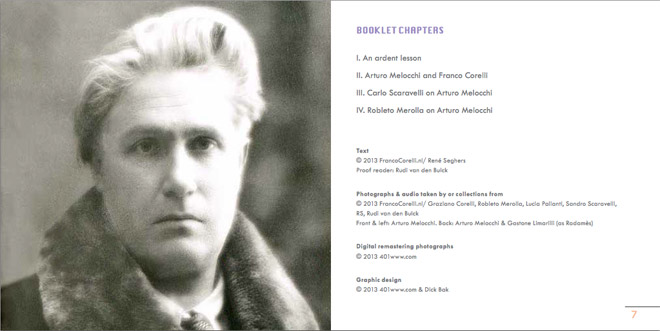 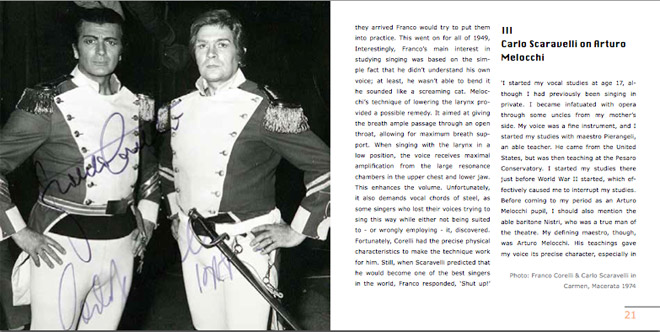 A little over a year ago we have inventorized the wishes of our members regarding CD–issues versus downloads. We had stated that we needed either substantial donations (around $ 5000 per issue) to produce high quality cd issues with the sort of booklets we envision. We needed 200 advance order copies for such an issue and received interest for about 10%  of the needed number. In short, interest fell far short of what was needed, perhaps also because selling is not our prime objective. Maintaining the website and funding research is. We sell these downloads at modest price of 12 euros for a two cd set with a truly elaborate, well researched booklet, for which I’ve traveled as far as Pesaro. We hope that at least some of you will enjoy the effort.