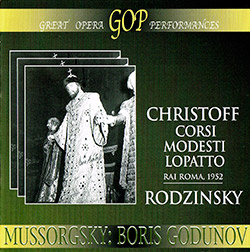 Loretta Di Lelio appeared as Xenia in Mussorgsky’s Boris Godunov broadcast of December 10, 1952, just 4 days before Franco Corelli’s role debut as Prince Shuisky/L’Innocente. Her entrée as the tsar’s daughter is really overshadowed by the song of the nutrice watching over her, but for what its worth, she can be heard here singing with exactly the same orchestra and costars that Franco would those 4 days later, stepping in for Angelo Mercuriali. La Nutrice here is the mezzo-soprano Amalia Pini.

The Tsar's apartments in the Kremlin

Boris's daughter Xenia is weeping, because the prince she was to have married has been killed in battle. While the Tsarevich Fyodor studies a map of Russia, Xenia's nurse tries to console her. Boris arrives and he, too, offers Xenia words of comfort:

For completeness sake we give here the cast and performance dates with Franco Corelli, the subsequent days. Then, the ‘B-cast’…