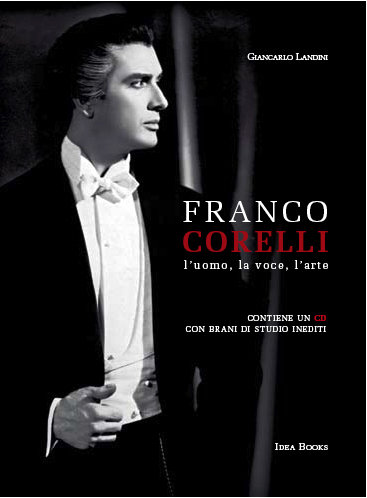 After twenty years of silence since Marina Boagno's first publication, a veritable eruption of Corelli books has followed, of which Giancarlo Landini's "Franco Corelli l'uomo, la voce, l'arte" is the latest fruit. Before reviewing it in detail, I would like to stress that this is definitely the Italian language portrait of the tenor to have. It easily outclasses all its predecessors in that language except for perhaps La Scala's "Omaggio" of 2001, a book that of course benefitted from Landini's contributions as well, along wit those of the esteemed Alberto Sinigaglia. And in writing this pre conclusion, I am only referring to the level of Landini's writing, without mentioning the sheer beauty of the print, or the audio CD insert which features a selection of Franco's home recordings!

Having said that, there are some choices made by Landini, that limit the scope of his book. He begins by complimenting Gilberto Starone, Frank Hamilton and myself, while dismissing the gentle Marina Boagno. He stresses that he feels that there is room for a synthesis: less private life than I revealed, and better information on the tenor's career than Boagno provided. Basically, that is the line also adopted by the previous author on Corelli, Vincenzo Ramón Bisogni, whose efforts Landini dismisses as second rate (see our own review elsewhere on this page).

Naturally, I was curious how Landini would solve the obvious problems that his wish for a synthesis created, given that he he worked closely with Loretta Corelli, who previously prevented Boagno from including any information on Franco's private life. There we arrive at a curious point: while arguing that he wants to mediate between the two approaches, Landini in reality doesn't attempt such an undertaking (which would require an enormous amount of research and money, especially with respect to his American years). Instead, he combines the two tracks followed in Boagno two books, "FC Un Uomo, Una Voce (A Man a Voice)," and "FC I suoi personaggi (FC and his roles)." Given the mentioned collaboration with Loretta, that is perhaps hardly surprising, although, oddly enough, I must say that she never asked me to restrict myself in any way. Nor did any family member ever limit me in any way. Meaning that Landini's choice to limit himself to Franco's career may well have to do with the type of biographies tho which Italians are acccustomed . In fact, Graziano Corelli recently told me that a book like POT could never find ground in Italy, due to its Western–European / Anglo-Saxon focus. Likewise, Landini's choices may really be just a matter of custom.

Those looking for more information on the tenor's private life than provided by Boagno, will search in vain: Landini starts his chronological account "Franco Corelli anno per anno (FC year by year)" with a few pages that introduce the period before Franco's debut, then continues with a year by year career resume. His analysis and source material here is certainly superior to Boagno's. On page 103 begins the selection titled "L'arte di Franco Corelli (The art of Franco Corelli)", which has analytical chapters such as "Doverosa promessa (Duly promised; a.o. on the failed Otello atempts), "Anomalia Americana" (on the American years), before discussing the repertoire role by role (just as Boagno does in "FC I suoi personaggi").

On page 227, we arrive at the CD tracking and the appendixes.

Naturally, Landini benefitted from new information, such as a 1961 interview that was published by Graziano Corelli in 2008, in which Corelli recalls when he was scheduled to sing Guglielmo Tell: approximately 1961/1962, based on the tenor's statement that the Gli ugonotti performances of 1962 were given instead of the originally planned Guglielmo Tell..

Regarding the CD that accompanies the book, I must congratulate my colleague. Publishing some of the Guglielmo Tell excerpts, also two completely unknown Cetra songs, as well as Corelli singing along with Lauri-Volpi and Caruso recordings (among others, "Ah! Fuyez, douce image" from Massenet's Manon), is both a scoop and a mayor contribution to the discography and understanding of Corelli as an artist. But the choice to start with an interview excerpt, and to leave the Tell excerpts unedited and incomplete, albeit in a fine technical restoration (by Simone Corelli!) would certainly not have been a line adopted by me, had I had the chance. For a detailed review of the CD by Bruce Badger and myself, plus some added remarks by Frank Hamilton, I refer to the Reviews section elsewhere on this website. 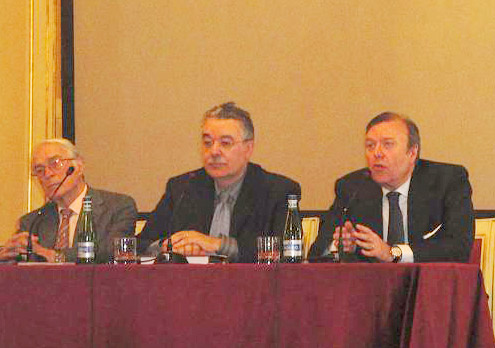 Whereas the book as a whole is a coherent essay on Corelli's career, Landini's real problem concerned the publication of his own chronology/ discography. A hard task, given the fact that Starone, Hamilton and myself, ever including each other's discoveries, have now arrived at a point where such an undertaking is limited to the inclusion of a mere hand full of new inserts. And so, Landini chose to follow a slightly different road, giving Franco's career in all sorts of tables, usually without cast lists: chronological, per theatre etc. Nice for researchers like Hamilton and myself, and fantastic for true buffs crazy about statistics. But typing La Scala in Hamilton's pdf gives you the same result, while you keep the chronological account and all the details of the performances. All in all, the various divisions of the info make the chronology less accessible. I was most surprised though, to observe that Landini chose to ignore my partial chronology, published on top of each chapter in POT, attributing all my finds there, among them the "Suprema Confessione" tracks, to my friend Frank Hamilton. Which leads me to an amazing conclusion: apparently Landini didn't check my own book in great detail, since he indicates several broadcasts that Frank accepted from me, such as the 1967 RAI broadcast "Appuntamento con Franco Corelli", as "mentioned in Hamilton only." That is silly, especially in this case, since I published screenshots of that broadcast in POT, featuring Franco singing Otello!

Likewise the RAI 1955 concert is mentioned in POT, but Landini refers only to it's absence in Hamilton, while it's present in Starone. The unique fifties song discoveries in POT, which are all exclusively in my private possession (as is the original "Suprema Confessione" film reel), pass unmentioned, since they aren't to be found in either Starone, Hamilton, or the yet unpublished chronology by Carlo Marinelli-Roscioni, who gave Landini insight in his work (which raises the question why you would use the man's fruits – presented with considerable brouhaha – instead of publishing his or a joint chronology, as Boagno had done with Starone). Given Landini's neglecting of all chronological and discographical info from POT, it makes sense that he doesn't mention those recordings. But his conclusions/ referring to Hamilton's omissions are wrong: Frank and I have announced already more than a year ago, on this website, that we are working together on a joint chronology in "FC the legacy." And we kept both my POT novelties (such as the 1950's song recordings, but also my acceptance of the RAI 1955 recital) as well as some unique new info found afterwards, for our joint printed chronology in "FC The Legacy."

Since we announced our cooperation, POT info should be regarded as upcoming Hamilton–Seghers info: any omissions of POT in Hamilton are not because Frank dismissed or overlooked them, but because we keep our final results for "FC The Legacy." 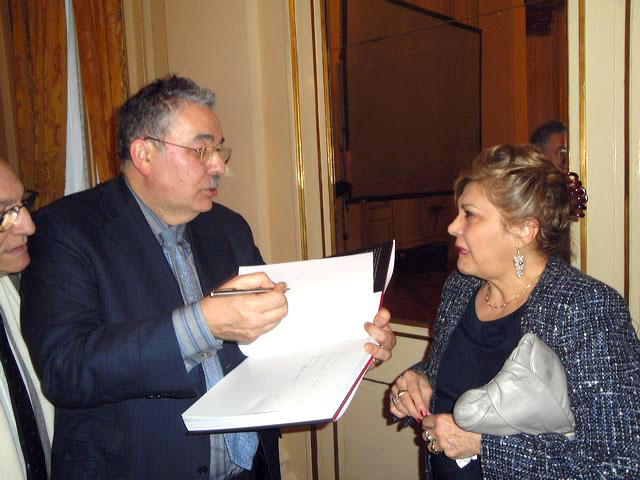 I truly don't know Landini's motives for ignoring some discographical info from POT. Certainly, my partial POT chronology is incomplete, because it's aim was to illustrate only those performanes mentioned in the body of the text, while the complete chronology was always intended to appear later, in "FC The Legacy." Perhaps Landini thought I invented those unique recordings, since no one has ever heard them, except for some guests to my house. They will, however, appear on the CD we plan to include with "FC The Legacy." Which will end all discussion with respect to their existance. Hearing is believing, that is a fact. Many people doubted that the Guglielmo Tell recordings described along with the other home rehearsals in POT really existed, but thanks to Landini those who doubted can now hear them with their own ears!

The major issues to Franco Corelli's chronology and discography, however, are not to be seen in the ten or so possible disputes or additions to and from Starone, Frank and myself. These issues are trivial really, and only of interest to Starone, Frank, Landini and myself. The real issues and the real challenge are of a completely different scope, which will be addressed to in "FC The Legacy."

I have admired Italian print before, in the "La Scala Omaggio a Franco Corelli," and in Boagno's two Azzali publications, and didn't think these could ever be surpassed in terms of sheer splendor (Anglo-Saxon publishers don't waste that much money on print and photos, rest assured). But... I was wrong! In a herculean effort Landini and the publishing house Idea Books created an oversized book on glossy paper in 30 x 26 cm size! It's not a photo book; it's a poster book! With 200 pictures, largely different from those in POT and Boagno, since, like the undersigned, Landini had access to the wealh of photos in Loretta's archive. 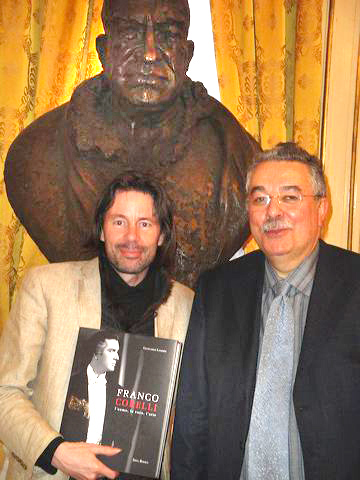 Although Landini's effort easily outclasses Boagno's two books, those who have Boagno's and are able to read Italian, would probably not benefit much from Landini's text, given that it is still only a career resume. Though well written, it adds little to Boagno's view apart from Landini's personal perspective, some details, and his greater knowledge of singing and of the world of opera. Most peculiarly, Landini even chose more or less the same title for his book "FC l'uomo, la voce, l'arte," as Boagno had for her's: "Un Uomo Una Voce."

Due to the Italian language, the book is limited to the Italian market, certainly in this glamorous and expensive format. And yet, it has two very attractive points for the true Corelli devotees around the globe: the photos, and the CD (see review on the Reviews page). These wonderful assets make Landini's labor of love indispensable, and I must recommend it; could I play the trumpet, I would sound it now – for Landini & Idea Books!

Available from the established UK book dealer George Burr at This e-mail address is being protected from spambots. You need JavaScript enabled to view it