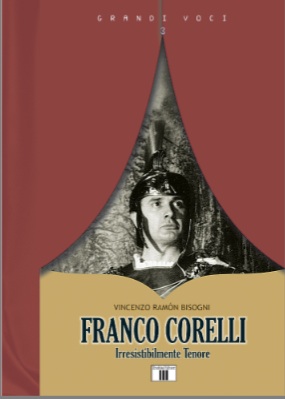 Good news: Until 2009, te Italian Publishing industry left the Italian publishing industry ignored its most interesting singer for 28 straight years in a row, leaving the honours to Marina Boagno alone. Following the 2008 publication of Prince of Tenors in the USA, sevaral Italian ublishing hosues were in a hurry to have a Corelli bio of their own. Among them Zecchini Editore, who commissioned Vincenzo Ramón Bisogni to delvier a text for 'Franco Corelli, Irresistibilmente Tenore'. Good for Corelli of course: the more books, the more interest, the better his legacy will be preserved.'Franco Corelli, Irresistibilmente Tenore' however makes for a pale comparison with Giancarlo Landini's book that was published a bit later.

Mr. Bisogni is an accomplished writer, who actuallyproduced several fascinating books in the past. For the average Italian reader the book will present a general overview of Corelli's career, but entirely baaed on Marina Boagno's and Mr. Seghers's book, it doesn't present even a single new insight. There's no original research to be found in the book, which is no more than a summary of either Boagno (1991), Landini in the La Scala Omaggio (2001), or Seghers in Prince of Tenors (2008).

One could say that in presenting an entire chapter on the comparison between boagno and Seghers, he doesn't hide it. However, his remark that he judged notes and sources 'superfluous' in shameful. The real reason is that he would have to write a 1000 times Boagno or Seghers as source reference. In Western Europe or North America such liberal quoting without direct source reference would be impossible without getting copyrights trouble, but Mr. Seghers doesn't complain:

"Mr. Bisogni acknowledges on page 2 that Prince of Tenors > inspired < him, and his second chapter is even titled after me! Apart from discussing the merits of my book, he also provides a psycho analysis of me there, even though I have never had the honor of being introduced to him (and even though he doesn't seem to have been trained as a psycho analist). So, as for flattery and attention, I have little to complain about. However, if we ever get to publish Prince of Tenors in Italy, it must be crystal clear that all references to the testimonies of Marco Corelli, a number of personal friends, and unique source material from my clippings files of original newspapers all derive from Prince of Tenors and not from Bisogni, who just copied them from my book and from Boagno's without permission and without mentioning the direct source. The Corelli family was not consulted on Bisogni's bookin any way. Did Bidogni really not bring up a single question of his own? He did in launching the theory that Franco may have changed his name from Dario to Franco because, at the time, there was an Italian bass named Dario Caselli...'

For non Italian speakers the main question of interest would be to the photo section in Bisogni's book.  Unfortunately, there are but two photos in the book. We were a little surprised by this, actually, because Zecchini editore published some spectacularly designed singer biographies which were larded with photos. Clearly they did not want to waste a penny on this cheap hit & run product.

The back section of FC Irresistibilmente Tenore has a short essential chronology section, and a discography. For all its brevity, we would have welcomed a courtesy to Gilberto Starone and Frank Hamilton, neither one of which is even mentioned here. Gilberto appears once, as co author to Boagno in the chapter where the merits of Boagno versus Seghers are discussed. Hamilton goes completely unmentioned; surely Bisogni can't have missed Frank Hamilton during the 'research' for FC Irresistibilmente Tenore... It is painful to see a once respected author such as Bisogni sink to this level of shameless stealing. There's nothing gazza about this ladrò.

Italians who don't rspeak English now have The La Scala Omaggio for the critical evaluation of Corelli's career as well as for the photos (2001); the new Italian language Boagno edition for some unique first hand testimonies (a.o. from Ziino) including an outstanding photo section (2008) and Landini's 2010 publication, which easily outclasses the Italian language competition.