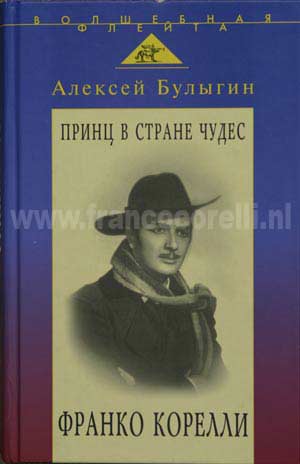 Of all the six books that have been printed about Franco Corelli thus far, only Alexei Buljigin's Russian language biography Prince in Wonderland attempts a comprehensive portrait of the man and singer alike. Residing in St. Petersburg, Buljigin did not have the means to do personal source research in Europe and America, but that was not a great handicap as his original idea was merely to make a translation of Marina Boagno's first book. However, as he brooded over the translation, Buljigin realized that it was outdated because of all the new sources that meanwhile had become available from the endless interviews Corelli gave to Stefan Zucker to other interviews, recordings, articles and even books written about Corelli's colleagues. Consequently, a new book emerged. In it, Buljigin's focus is not on Corelli alone; he gives ample space to the whole operatic milieu of Corelli's day as well. The tenor's career is presented within a context, making this also very much a book about his colleagues. Within those boundaries, Buljigin paints a beautiful picture of Corelli and he does so in a warmhearted, passionate Russian style. The author's love for all those legendary names, theaters and operas radiates from nearly every line in the book. That he frequently gets diverted away from the main subject into all sorts of side trips, you readily forgive him due to the sheer passion that he brings to these excursions. His unstinting enthusiasm has inspired me and I hope to honor Buljigin a little bit in my own style, while aiming to finish what had originally been his intent as well: to provide a complete and comprehensive biography of the life and times of one of the most interesting and enigmatic tenors that ever lived; indeed, a "Prince in Wonderland."

Naturally, relying only on published sources throughout, Buljigin provides little on Franco's youth, his private life or anything that takes us backstage with the Corellis, though he provides all information available to him at the time, including an interesting portrait of Loretta.