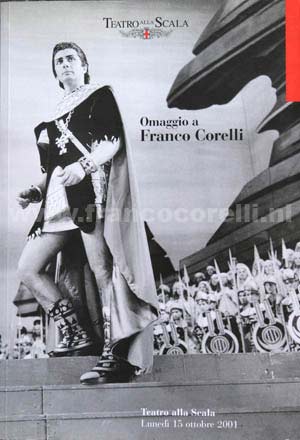 The invaluable Omaggio a Franco Corelli gave the best impression of Corelli "the man" before Seghers's Prince of Tenors was published. The huge number of beautifully printed Erio Piccagliani photos documenting all of Franco's Scala premieres are a feast for the fan; the accompanying introductory article "The golden ladder," by Giancarlo Landini, is an outstanding piece of work. Best of all, Alberto Sinigaglia's interview with the tenor is impressive and there is quite a lot about his youth contained in it as told by the man himself. Unfortunately for many, it is available in the Italian language only (they've apparently never heard of tourists at La Scala's publishing house).