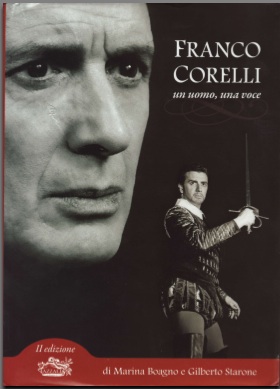 The first book about Franco Corelli hit the shelves in 1990, written in Italian by Marina Boagno under the title Un uomo, una voce. In 1996, it appeared in an English edition under the title A man, a voice. As there is now a welcome new and revised 2nd English edition, we will not repeat too much of what can be read about the first Italian-English edition online and elsewhere. Suffice it to say that they convey that Corelli was born at thirty, didn't marry and apparently slept in the opera houses, for there was never any information that went beyond the singing itself and moving from theater A to B and C. Fortunately Boagno in her revised new English edition has chosen to follow her own path a little more than the one the Corellis wanted her to take. As we are producing a competitive biography ourselves, we feel it is inappropriate for us to critically review her revised second English edition. For that reason, we will merely point to its strong points. The first is that she finally provides Franco's fans with a brief general outline of Corelli's first thirty years, a period that had been completely missing from book one. With the subject of the book regrettably no longer among us, she also had the courage to include his correct and well known birthdate in the revision. Then some family members are briefly introduced, such as his singing uncles Corrado and Viero, his grandfather Augusto, his sister Liliana and brother Ubaldo, known as "Bibi." She even briefly mentions his childhood sweetheart before we come to page 15 where he takes up singing. From there on the book's revised edition is very much as it was the first time around, although Boagno added some details here and there. Most notably she brings in a few lines on Corelli's marital status. The last major addition is found at the end, where she describes the course of events around Corelli's death with barely concealed dismay and she is quite rightly critical of those circumstances, for what happened there was very much unworthy of that unique man. If still very brief, and almost reluctantly given, these added details will nevertheless make this new edition an asset for any fan, despite the fact that the book is not in reality "expanded" but shortened by ten pages, in addition to which the photo section from the original issues are cut approximately by half. Therefore, if you don't already have her earlier books, you may want to acquire at least the Italian edition from 1990, because that is lavishly illustrated with numerous finely printed photos throughout. 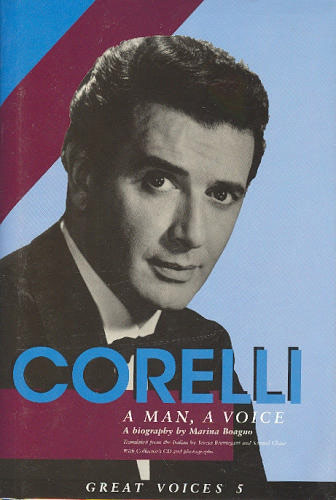 We repeat for the 2nd English edition the praise we had reserved earlier for Gilberto Starone's Corelli chronology and discography, which is largely the same as the one presented in Boagno's first edition. Naturally, any printed chronology will be outdated almost immediately by the scope of Frank Hamilton's efforts online. However, at the time of its conception, long before the internet enriched us as it does today, Starone's was a tremendous piece of work, as was the once invaluable tapography compiled by Federico Rota that lamentably has been omitted from the revised edition. We would love to have seen that tapography of live recordings updated. Once more: Starone's and Rota's pioneering activities in the field were unique for 1990's standards and both Hamilton and I must bow before them in gratitude. Thanks to them we had a framework to build on, which is a lot easier than working from scratch.

The biggest news with respect to the Italian language revision of 2008, is that Marina Boagno followed the advice to acknowledge Gilberto Starone as co–author: "Bravo, Marina!"

Marina Boagno's 2008 Italian language update is basically the Italian version of her 2007 revised English language edition, except that it adds a few comments about Frank Hamilton and myself. With respect to the text, he biggest news, therefore, is that she followed my on-line advice and promoted Gilberto Starone to co-author! For this generous and well-deserved action, I bow in acknowledgement and cheer: "Brava, Marina!" 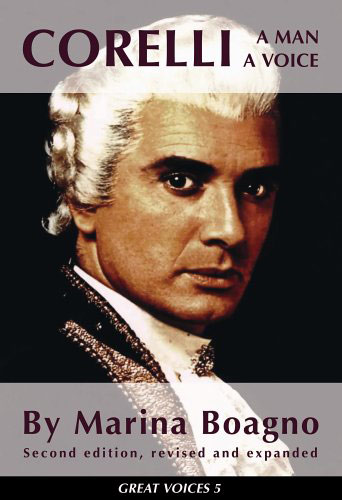 Welcome as that action may be, for the fans it is not the most important novelty in the new Italian Azzali edition! For that we must turn to the photo section of the book. We finally see some of the photos that we had longed for in her first edition: more childhood pictures, his mother, Franco in private with his cars, etc. Most welcome are two new pictures from Franco's childhood taken with the neighborhood kids (their names are missing, but a look at Prince of Tenors' different photos of the same group will easily remedy this omission), and a wonderful new picture of Franco in Enea (full page)! My enthusiasm is, in part, due to the fact that these new pictures are reprinted in the same wonderful high quality of the original Azzali Italian edition, which makes it a must for every Franco fan.

There is no need to repeat my praise for Gilberto Starone's chronology, as I have acknowledged his efforts many times, and even thanked him for it in Prince of Tenors, acknowledging that he is the godfather of both Frank Hamilton & me in the Corelli chronology department.

The sword of Franco Carelli

Even though the text of the newest Italian edition differs little from the revised English edition, Ms. Boagno has added some slight mention of Prince of Tenors on three occasions where she disputes something I had written. That, however, is risky business, or so I learned after having once taken this approach myself, in my first published biography (a book on Jacques Brel). In one of these cases where I am quoted, Ms. Boagno acknowledges that I discovered the existence of an extant copy of Franco's movie Suprema Confessione, after which she seems to reveal the title of Corelli's second movie as "La spada dell'islam" (The sword of the Islam)... a movie which, she writes, she unfortunately could not trace any further details about. However, and not by accident, I happen to have a copy of "La spada dell'Islam" (the video version was released in, of all places, The Netherlands :) The mistaken assumption many have now made that Franco Corelli had appeared in this movie was, in fact, due to an incorrect IMDB listing that, once published, spread like wildfire. The actor in that movie causing the mix up is one Franco CARELLI, not Corelli. Had Ms. Boagno just asked me about such issues, I would have clarified it and given her a copy of the movie so that she could see for herself. The details I have about Franco's actual second movie, however, are reserved for my upcoming book on his recorded legacy, Franco Corelli: The Legacy. 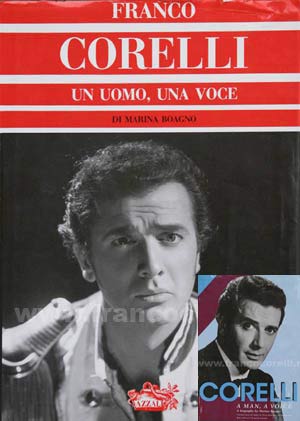 Any biography is bound to have a few missing or mixed up dates. To her credit, Marina took the opportunity to correct points of criticism in her own various new editions, and any differences of opinion do not affect Marina's book in any critical way. Least of all where Marina claims to hold a "different" view on whether Franco's grandfather Augusto was a professional comprimario tenor - she agrees he was a singer, but disputes the value of his efforts, which in my opinion is synonymous with his having been but a comprimario tenor. Elsewhere, especially with respect to the tenor's childhood years, there is room for interpretation. Sources are scarce there, although I do stress that, with the help of Marco Corelli (now suddenly promoted by Ms. Boagno from the "a certain cousin" of earlier editions, to "Marco Corelli" in the acknowledgements), I had the benefit of speaking with all of Franco's known surviving childhood friends (including the "anonymous" kids in the childhood photo mentioned above), and to the children of some others. Such contrasting propositions are, however, interesting - if we agreed on everything we might as well merge forces, as I indeed did with Frank Hamilton, with whom I will sort out all remaining chronology questions, including the one that Marina raises; once more, these clarifications will be published in Franco Corelli: The Legacy.

Therefore, in recognition of the undisputed love of Boagno & Starone for Franco, and for the truly magnificent photo section, I wholeheartedly recommend this latest Italian language Azzali edition of Boagno's book, even for those who do not speak Italian. And yes, for my English speaking readers, this new edition was and is harder to find, even for me, than "La spada dell'Islam." And so, I have teamed up with my long time friend, the esteemed bookdealer George Burr in the UK, who accepts paypal and ships internationally, in order to promote Marina's latest book edition. You can mail George at This e-mail address is being protected from spambots. You need JavaScript enabled to view it

I guess that sort of proves my earlier made point, that our books can easily coexist. As for websites, I am merely glad that mine inspired hers so much, and for those who still have doubts I gladly add this photo of us, as further proof that we get along fine, whenever we get to meet: 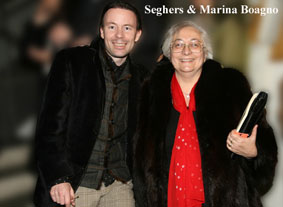 I hope my publisher won't shoot me for being so friendly to the competition...